Is it now or never for the commodity markets?

It has been a rough year for commodity bulls, but things can change quickly.

As a commodity broker, it has been particularly painful to see the value of commodities depreciate in sympathy to a stronger U.S. Dollar. However, it has been almost unbearable to see weakness continue to plague the commodity markets in the face of a downturn in the greenback. The lack of a response to changes in the currency markets, is a clear sign of horrific market sentiment.

No longer do investors yearn for allocation into long only commodity funds; which, by the way, played a big part in their over-valuation several years ago. Instead, investors have spent the last year liquidating their holdings; most of them licking their wounds.

We will be the first to admit that we didn’t see the entire commodity complex getting this “cheap”. Further, sometimes even cheap markets get cheaper. Nevertheless, on a long-term scale we are confident traders will look back on this in the same way they do the 2008 commodity melt-down; as a missed bullish opportunity.

It is no surprise that the major driving force behind the most recent bout of selling has been weakness in Chinese economic data, but conceivably volatility in the Chinese equity market simply bled into the commodity markets. We don’t know enough about Chinese equities, to try to call a bottom there but we do know that the Bank of China has few limits on the measures it can take to stabilize its country’s financial system. In addition, although they sometimes mislead us, we know charts….let’s take a look at a few we find interesting.

The GSCI is dramatically oversold, but those that have tried to pick the bottom in commodities will tell you it has been that way for several months. Further, being oversold doesn’t automatically translate into buying interest. Despite that, it is hard to ignore the upside potential. Both the Relative Strength Index (RSI), and Williams Percent R (W%R) are hovering at rarely seen discounted levels, and the chart is suggesting a possible double bottom.

It is no secret we started getting bullish in the Australian dollar a little early, but at this point we are still of the belief that eventually the currency will find footing. If China can find a way to get its house in order, or at least the appearance of such (which is more likely than a true fix), the Aussie should catch up with the other currencies in regard to appreciation against the greenback. After all, Australia is highly dependent on commodity prices, and weaker demand expectations from China has held the currency hostage.

The Slow Stochastic technical oscillator has dipped into oversold territory on a weekly chart and appears to be trying to turn the corner. Similar patterns in the past, which date back to mid-2012 have resulted in sizable rallies. If we get a repeat, we suspect the low 80s will be possible on a quick short squeeze. 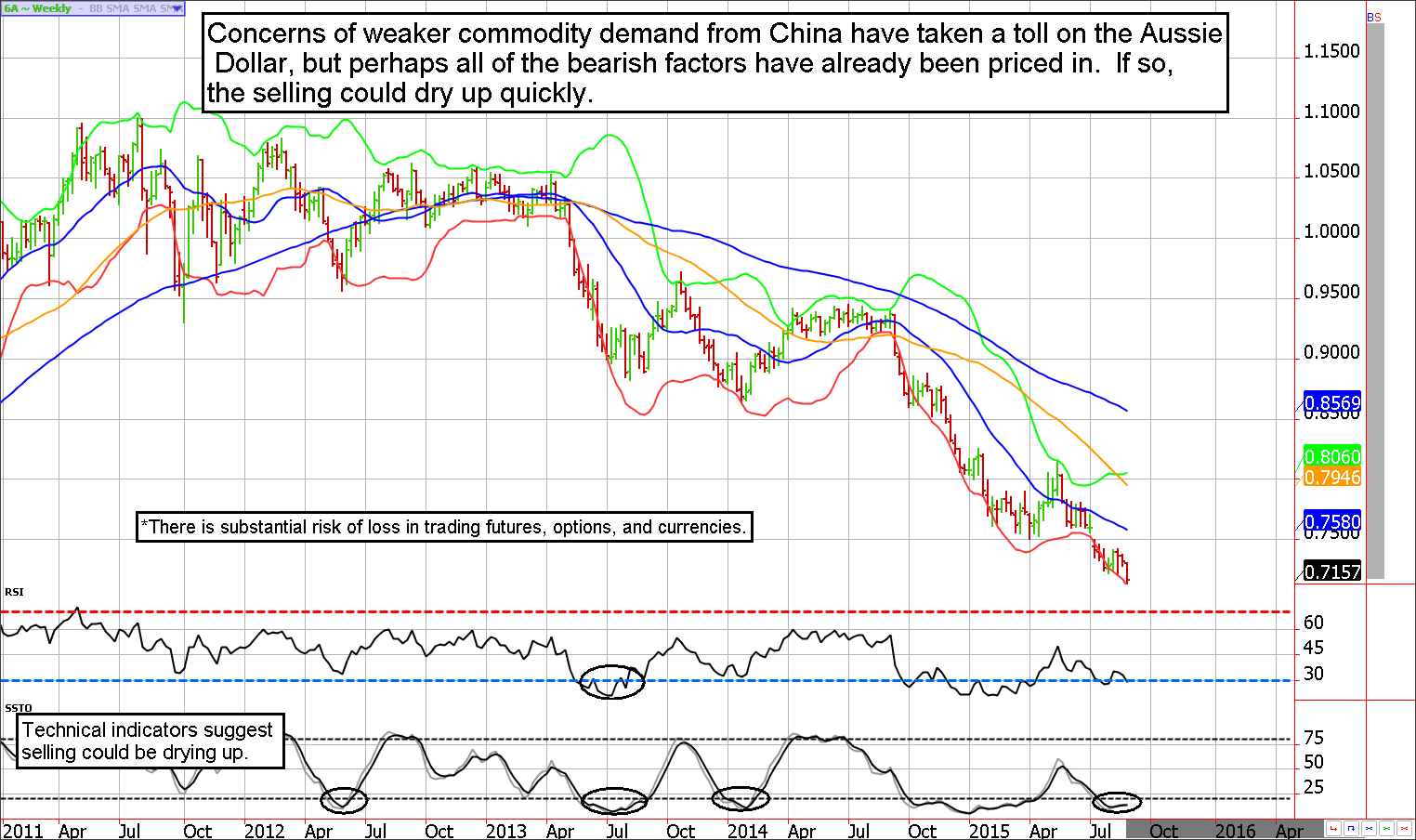 The Chinese stock market is primitive in that it tends to experience much bigger booms and busts that a more developed equity market might. Further, it is governed by aggressive and unconventional tactics. However, it has managed to develop stable trend-lines and a pattern of rebounding from an RSI reading of 30 or less. If history repeats itself, stability could be right around the corner. 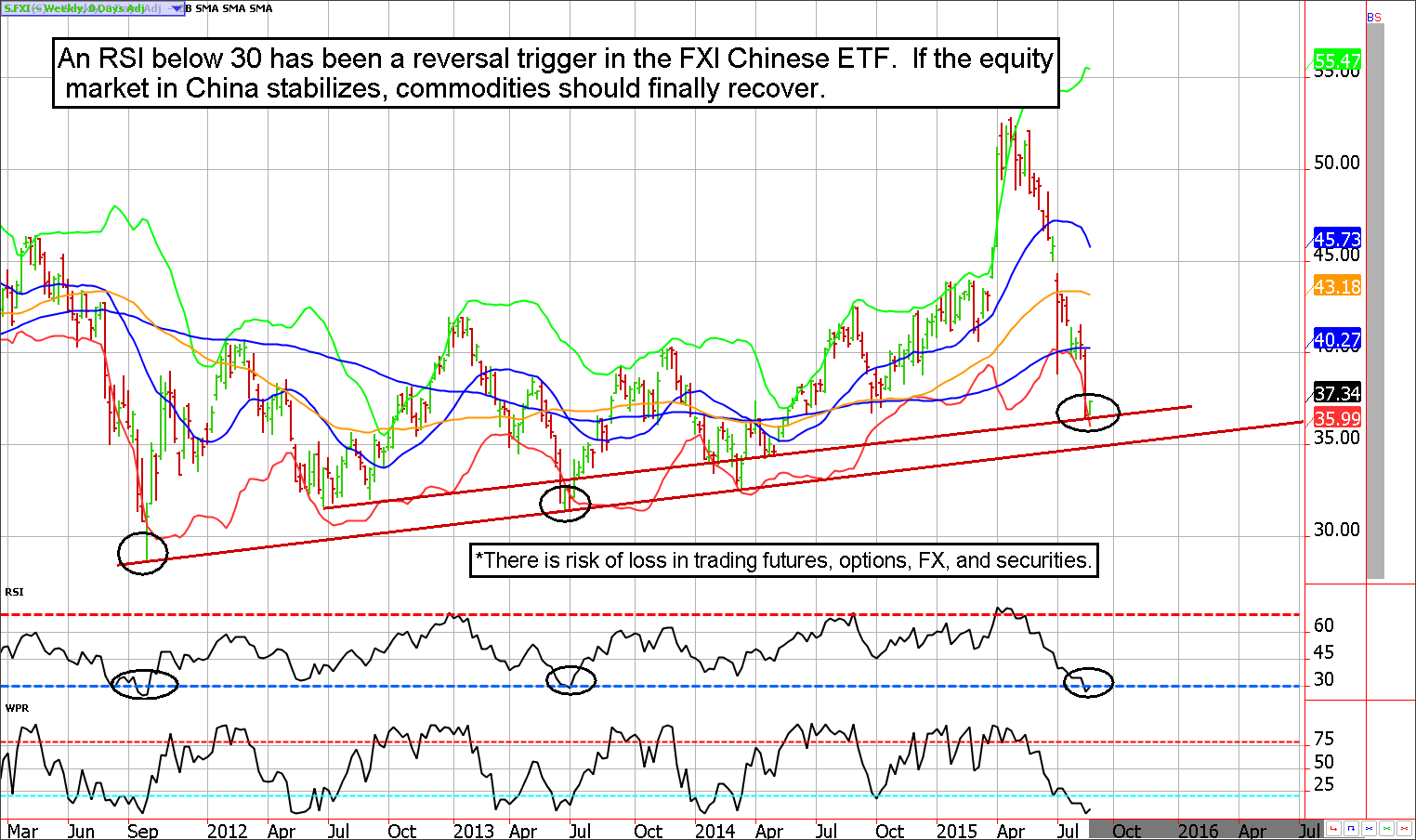 The commodity complex as a whole is likely yielding aggressive investors historically attractive alternatives. Nevertheless, that doesn’t mean you should bite off more than you can chew; the risks of participating are real, and each commodity should be assessed individually.