The equity bulls have a lot of noise to contend with.  Last weekend’s terror attacks in Paris, and the realization that the downed Soviet passenger plane last month was also an act of terrorism suddenly shines a light on a risk market participants have been ignoring.  However, we are approaching a time of year in which the equity markets almost always find support. 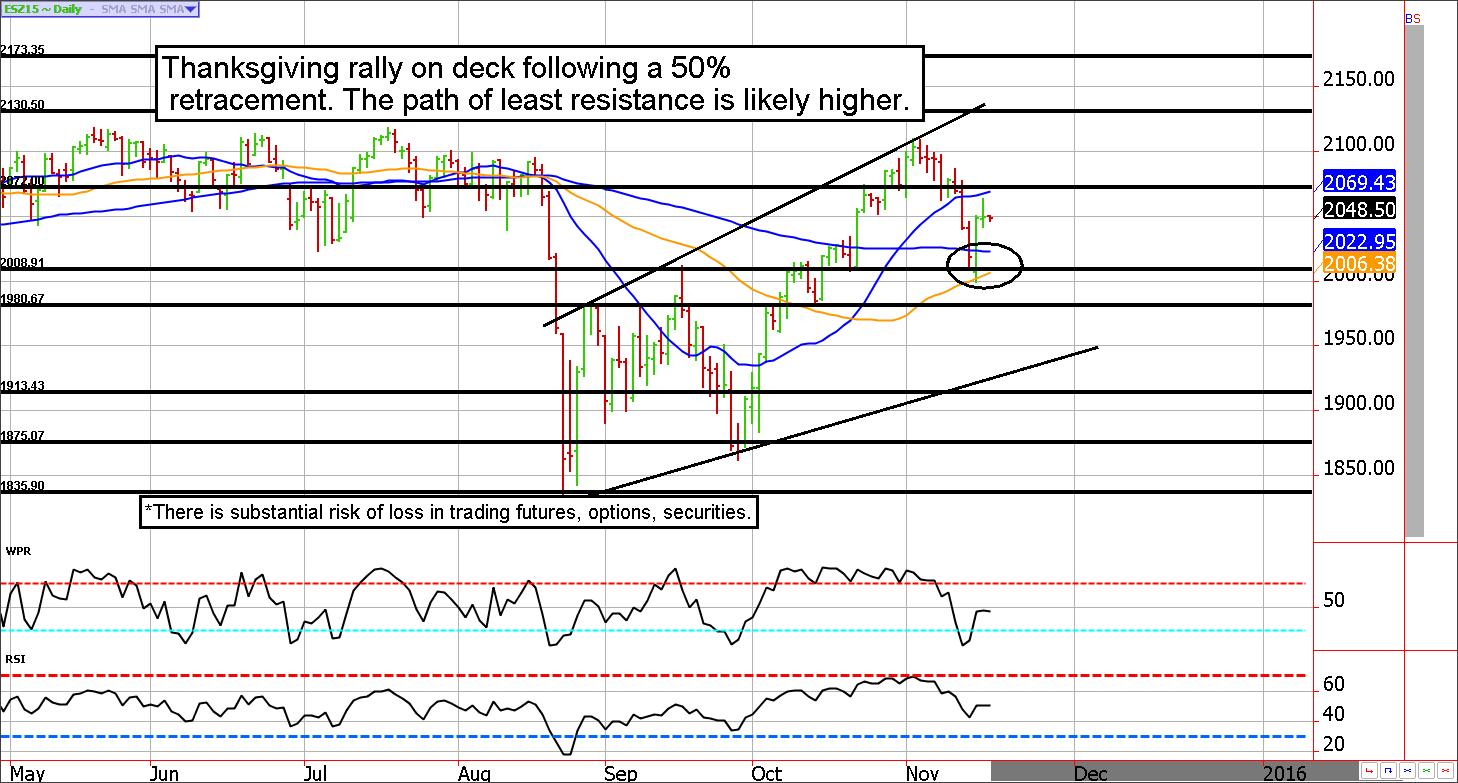 Every year we hear a lot of chatter about the Santa Clause rally, but the Thanksgiving Holiday often brings stock market bulls a lot of yuletide cheer in November. In fact, on most years stocks defy fundamentals to make their way higher throughout the holiday season, beginning its trek in mid-to-late-November.  Even during the financial crisis of 2008, the S&P 500 managed to delay selling long enough in late November to achieve a 200 point rally by early January.  Of course, the market eventually succumbed to new lows, but the year-end rally was alive and well.

Seeing this pattern year in, and year out, has left us refusing to buck the historical trend.  After all, one of our favorite statistics services identified a true and tried pattern in the Dow.  According to MRCI (Moore Research Center, Inc.), had a trader purchased an e-mini Dow futures on November 12th, then sold it on December 6th (which happens to be my birthday), the trade would have been profitable in each of the previous 13 years.  Over the 25 trading days, the average daily gain was roughly 10 points.

There is a similar stat using the e-mini NASDAQ futures contract in which a buy on November 19th followed by an offset on December 6th, has produced profits in 14 of the last 15 years. The S&P 500 futures contract has a propensity to move higher along with the others, but the seasonal stats suggest the best buy comes on December 17th through January 3rd; this trade has been profitable in 14 of the previous 15 years.

Another short-term move that has provided active traders with an opportunity, is the notorious Black Friday rally.  According to the Stock Trader’s Almanac, the Wednesday before Thanksgiving and the Friday after have a great track record over the years.  In the previous 62 years of statistics, these two days combined for losses on only 13 occasions.  Further, the week before Thanksgiving has seen the Dow post gains in 16 of the last 21 years.  The cherry on top, is the last trading day in November has been up 6 of the last 8.

In conclusion, fundamental traders might want to put their bearish research aside and ride the seasonal wave until 2016.

*There is substantial risk of loss in trading commodity futures, options, ETFs.  Seasonal tendencies are already priced into market values.