Will the Euro and Crude Oil find a Bottom together, or are they both doomed?

Will the Euro and Crude Oil find a Bottom together, or are they both doomed?

As much as crude oil is an OPEC cartel story, or lack thereof lately; it is mostly a currency story. In the midst of fundamental supply glut headlines, it is easy to dismiss the fact that crude oil is priced in U.S. dollars and its worth is highly sensitive to changes in the FOREX markets. Yet, in my opinion, currency valuation is the single most influential aspect in oil pricing.

Crude oil and the dollar are inversely correlated; thus, oil and the euro generally trade together. A historically high correlation between these two markets suggests they will either bottom together, or move lower together. Our best guess is both markets are closer to a low than most think, and as mentioned it is a reasonable to assume the euro has already seen its low.

We’ve noticed that the positive relationship between crude and the euro tends to strengthen and major tops and bottoms. Further, the euro seems to be the leader when it comes to trend reversals. In other words, when a trend is coming to an end it is the euro that makes the first move; after some excessive volatility, oil follows suit. This overlay chart depicts this phenomenon at the 2008 corresponding highs of the euro and crude oil, the 2009 lows, the 2010 lows, and again at the 2015 highs. We believe that Thursday’s euro short squeeze was the first hint at a significant trend reversal in both markets. However, crude oil will be prone to volatility before finally following suit (assuming it does).

The seasonal bottom in crude oil is due somewhere between December 10th and the 20th, but as we are constantly reminded seasonal patterns are estimations.  They can come early, and they can come late…or in some years they don’t come at all.  But, more often than not, seasonal tendencies are quite telling.  With the seasonal bottom looming, we looked again to the COT issued by the CFTC to see what speculators were up to.  We found that large speculators, who have been perpetually long crude oil, have liquidated the majority of their bullish holdings.  According to the latest available stats, large speculators were holding about 240,000 long contracts.  Judging by selling since these were figures collected, we suspect this group has liquidated further.  In the past, crude oil has found support when this group of traders has reduced their position size to about 200,000.  On the most recent occasions in March and August of 2015, these bounces have been significant.  If history repeats itself, a price reversal in crude oil should be looming as large speculators re-instate the long contracts they liquidated.  Further, most of the liquidation sellers have probably already taken action. 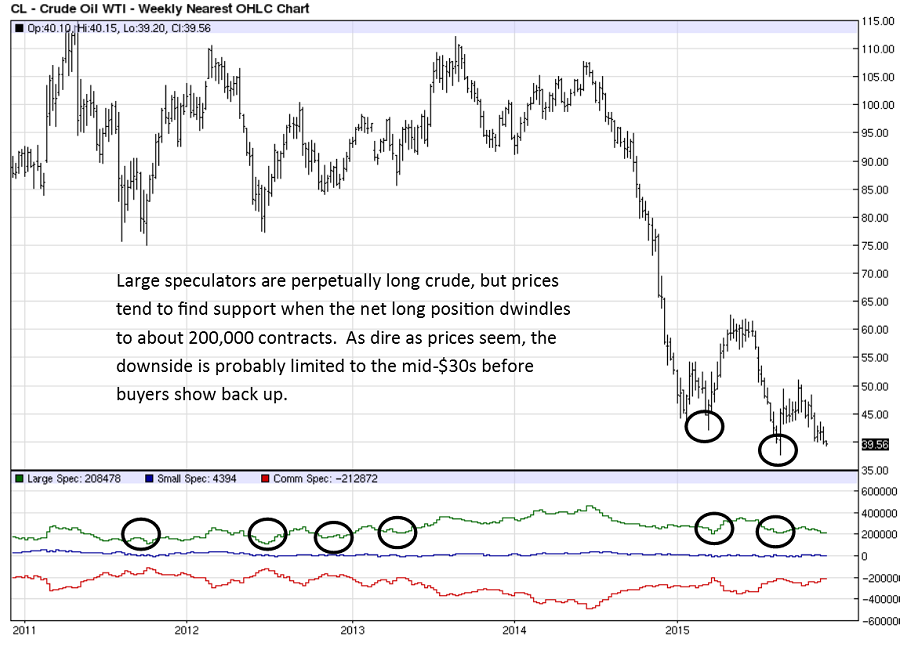 With positive seasonals and a relatively bullish COT setup in crude oil, we turned to the weekly chart to take a look at the big picture. The first thing we noticed was divergence in the RSI (Relative Strength Indicator). Normally, we look to the RSI to tell us when a market is overbought or oversold. What we found this time was the RSI wasn’t as low as it probably should have been given the depths of the crude oil decline. Further, the indicator is making higher lows, while the price of crude oil is making lower lows. When an indicator and market price are behaving in opposite manners, technicians refer to it as “divergence”. Divergence is often a precursor to a major trend reversal, so this supports the premise of a potential trend reversal in the coming week or so.

Also offering support to crude oil, the price bars on a weekly chart have formed a wedge pattern that dates back to January 2015 suggesting a move to $35.00 should be met with buying. With that said, some traders could be eying the 2009 lows which might trigger a quick trip to the $32 area. In either case, once the market has a little time to digest the OPEC news, a flush into the mid-to-low $30s, should mark the end of this move lower. Keep in mind, crude tends to make these types of flushing moves in a few days. So the move could be fast and hard, but temporary. If we are right about the mid-to-low $30s luring buyers into oil, and prices break above wedge resistance near $40, the run could easily extend into the $60 range.

What comes next for the Euro?

Currency analysts are looking at a mixed bag of nuts in the Euro; seasonal tendencies call for end of year buying pressure as multi-national corporations move money overseas for obligations such as taxes and bonuses.  Yet, the ECB has persistently provided a headwind with a steady reminder to the financial markets they are employing, and will continue to, a weak Euro policy to stabilize the European economy.  Nevertheless, we’ve noticed a few telling details on the chart that suggest the selling interest in the euro could be climaxing in the coming weeks, if it hasn’t already.  After all, we are setting up for the ultimate “buy the rumor, sell the fact” trade; traders have been aggressively buying into the dollar in anticipation of Central bank policy changes (easing in Europe and tightening in the U.S.).  As a result, current pricing most likely already recognizes future central bank actions.  Once we get beyond the Fed meeting next week, dollar speculators might “sell the fact”.

Honing in on the monthly euro char; since peaking in 2008 near $1.60, the euro has experienced several large sell-offs.  Each of those have extended losses from anywhere to 30 to 37 cents, with an average of 34 cents.  The most recent occasion has seen the price of the euro decline roughly 35 cents relative to the greenback.  In our view, this suggests most of the selling has already taken place.  In addition, both the Williams %R and RSI (Relative Strength Index) on a monthly chart are pointing toward oversold dramatically oversold conditions; which will eventually propel a recovery.  Nevertheless, it doesn’t rule out one more round of selling before the bulls grow legs.   If so, look for possible support on a drift back to the $1.0730 area.  If this level breaks, we can’t rule out a quick retest of the $1.05ish low, or even somewhere in the $1.02s if Central bank chatter garners an overreaction.  At this time, however, we believe the euro will find support before reaching such depths, but bottoms are a messy process which can see temporary price spikes to unjustifiable levels.   Should the bottom of the trading range hold, a move back to the $1.25/$1.30 area isn’t out of the question.  Of course, this type of development could take several months to materialize.

Seasonality is already factored into current prices, any references to such does not indicate future market action.

These recommendations are a solicitation for entering into derivatives transactions. All known news and events have already been factored into the price of the underlying derivatives discussed. From time to time persons affiliated with Zaner, or its associated companies, may have positions in recommended and other derivatives. Past performance is not indicative of future results. The information and data in this report were obtained from sources considered reliable. Their accuracy or completeness is not guaranteed. Any decision to purchase or sell as a result of the opinions expressed in this report will be the full responsibility of the person authorizing such transaction. Seasonal tendencies are a composite of some of the more consistent commodity futures seasonals that have occurred over the past 15 or more years. There are usually underlying, fundamental circumstances that occur annually that tend to cause the futures markets to react in similar directional manner during a certain calendar year. While seasonal trends may potentially impact supply and demand in certain commodities, seasonal aspects of supply and demand have been factored into futures & options market pricing. Even if a seasonal tendency occurs in the future, it may not result in a profitable transaction as fees and the timing of the entry and liquidation may impact on the results. No representation is being made that any account has in the past, or will in the future, achieve profits using these recommendations. No representation is being made that price patterns will recur in the future.