Did the stock market finally decouple from crude oil futures?

For as long as we can remember, the stock market and WTI crude oil futures have been moving in a positively correlated manner.  This bucks conventional Main Street wisdom that suggests lower oil prices are good for the economy because it immediately increases the discretionary spending budget of most Americans.  But in a post shale fracking boom, we are finding that the U.S. economy has largely benefited from the domestic oil boom…and now it must suffer from the bust.

As someone that grew up with a father working in the oil fields of South Eastern Utah, and a brother heavily involved in oil and gas extraction in New Mexico and Colorado, I’ve seen the results of commodity cycles on multiple occasions.   The difference now, as opposed to the 1980s, the industry has expanded to levels that can have an impact on the overall economy.   We can no longer enjoy lower prices at the pump knowing that our savings is contributing to layoffs and cutbacks across oil producing regions of the U.S.  With that said, many oil producers needed a wake-up call.

Just a few years ago, oil field employees in the trenches laughed at the out of control spending from the higher-ups.  I frequently heard stories of hundreds of thousands of dollars wasted on avoidable mistakes, carelessness, or a simple lack of experience.  At times when oil is above $100 and businesses are flush with cash, these types of blunders are ignored, but in our new world of $30 oil, it cannot be tolerated.  Unfortunately, in the commodity business low cycle prices are a necessity to clean things up.  In the end, oil companies will operate much more efficiently; even if we don’t see $100 oil anytime soon, the trimmed fat and more frugal management decisions will enable oil companies to come back stronger than ever.  Eventually, this will be a talking point for the stock market bulls, just as lower oil prices have driven equity bears in recent weeks.

As mentioned, oil futures and stocks have always been somewhat correlated, but in the previous 30 trading days it has been running in the high 90s!  In other words, the stock market and WTI crude oil have settled in the same direction roughly 95% of the time.   A correlation this strong cannot possibly last, nor should it.  If you take the same settlement stats dating back 180 trading days, rather than 30, the correlation drops to about 50%.  Wednesday was the first day in a long while, it was clear that crude oil futures and stocks were attempting to decouple, and trade on their own fundamentals.

In the long run, we believe this will be a positive development for both markets.  After all, in today’s world of algorithm (machine) trading, when the computers see a down tick in one market, they sell the other, and vice versa.  It is debatable which was the tail, and which was the dog, but it won’t matter if these markets finally stand on their own two feet.   Either way, it will take some time for the market to resolve itself; the previous trip into the $30s saw crude oil hover between $30 and $50 for three months before recovering. 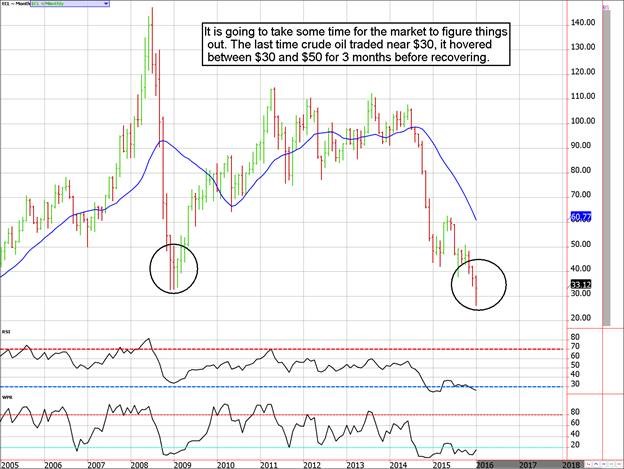 Bottoms and tops are messy, so there won’t be any stress free money to be made in either market, in any direction, but we have to believe any large dip should be a comfortable place to get bullish in either arena.  Be sure to keep plenty of ammo available.

**There is substantial risk of loss in trading commodity futures, options, ETFs.  Seasonal tendencies are already priced into market values.