The greenback holds the key...are we finally turning the corner?

Is King Dollar getting demoted?

Since late 2014, the greenback has been the “talk of the town”. In addition to dollar strength choking corporate earnings, it has played a big part in a commodity decline of historical proportion. As a commodity broker, with a front row seat to the chaos, I can attest the currency market is perhaps the single most influential driver of asset prices. The correlations between the dollar and other assets is real, and shouldn’t be overlooked. Before speculating in stocks, commodities, or even bonds; one must be aware of the currency market landscape.

Although it is too early to confirm, it certainly feels like Tuesday’s speech by Janet Yellen was the final straw for the dollar bulls. Near the December highs, the currency markets were assuming several interest rates hikes in 2016; thus, they had successfully priced in at least three or four of them. However, compliments to a rocky start to the rate hike campaign in the financial markets, the Fed Chair is pumping the brakes. In theory, this should lure bullish dollar, and bearish euro, traders into continued position liquidation. Keep in mind, although the dollar index is used as a benchmark for the greenback, it isn’t necessarily a popular vehicle used to place monetary bets on its fate. Most looking to go short the dollar, generally buy the euro, and vice versa.

In the futures markets, we’ve already seen large speculators, who are considered to be the “smart money”, liquidate most of their bearish bets in the euro. Specifically, they’ve shifted from a massive net short position from roughly 170,000 contracts late last year, to less than 70,000 now. However, we noticed something odd, in the ETF market. The EUO (UltraShort Euro ETF) has about $404 million in assets vs. $300 million the FXE, which is the primary long euro ETF. In short, those using the equity markets for currency speculation are still overly bearish the Euro. We’ve had a lot of time to think about this, and we’ve concluded those buying currency ETFs, as opposed to utilizing the futures or FX markets to speculate in currencies, are likely using much slower triggers to enter and exit speculations. Further, as a whole, they are likely less sophisticated speculators because ETFs are a highly inefficient means of currency speculation. Thus, we believe the futures market is leading the charge, and the ETF market will soon follow. 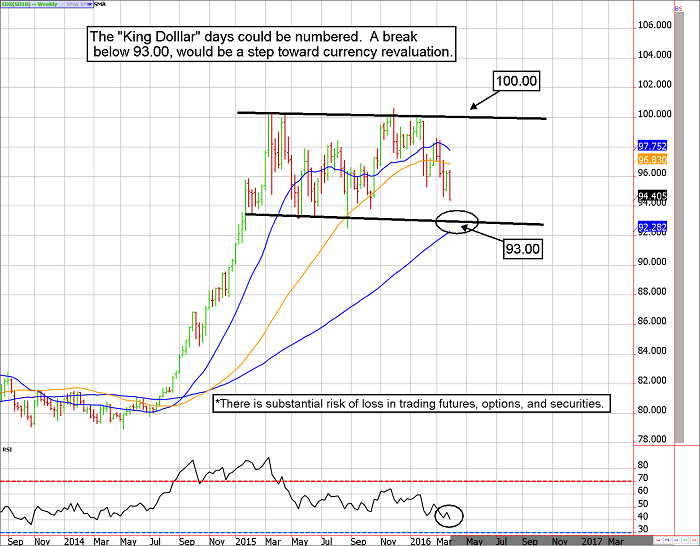 The dollar index has been trading in a messy, but valid, trading range since late 2015. If the sideways “trend” continues, we should be looking at a decline toward 93.00 in the index. However, if prices break below 93.00, which we believe is a probable scenario, we could see a significant repricing. After all, momentum indicators, such as RSI are trending lower, and bullish dollar sentiment appears to be waning. 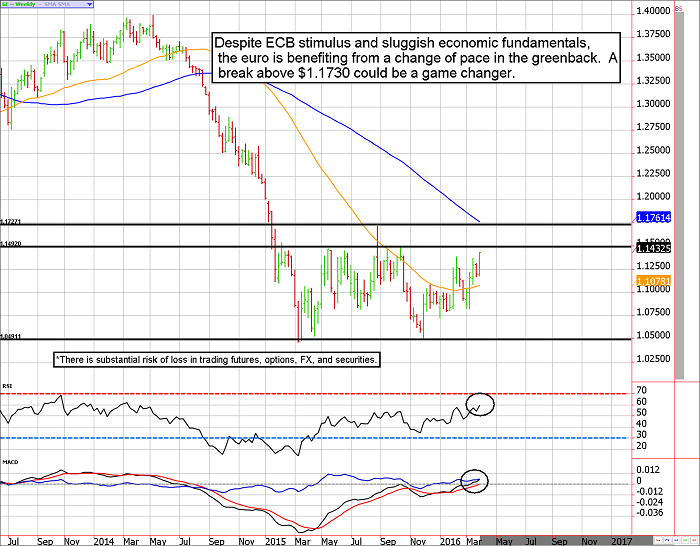 On the flipside, the RSI and MACD plotted on a weekly euro chart, are decisively bullish. However, overhead resistance near $1.1490, and again near $1.1730 pose a threat to the bull camp. Nevertheless, we believe the dye is case for a breakout!

**There is substantial risk of loss in trading futures and options.** These recommendations are a solicitation for entering into derivatives transactions. All known news and events have already been factored into the price of the underlying derivatives discussed. From time to time persons affiliated with Zaner, or its associated companies, may have positions in recommended and other derivatives. Past performance is not indicative of future results. The information and data in this report were obtained from sources considered reliable. Their accuracy or completeness is not guaranteed. Any decision to purchase or sell as a result of the opinions expressed in this report will be the full responsibility of the person authorizing such transaction. Seasonal tendencies are a composite of some of the more consistent commodity futures seasonals that have occurred over the past 15 or more years. There are usually underlying, fundamental circumstances that occur annually that tend to cause the futures markets to react in similar directional manner during a certain calendar year. While seasonal trends may potentially impact supply and demand in certain commodities, seasonal aspects of supply and demand have been factored into futures & options market pricing. Even if a seasonal tendency occurs in the future, it may not result in a profitable transaction as fees and the timing of the entry and liquidation may impact on the results. No representation is being made that any account has in the past, or will in the future, achieve profits using these recommendations. No representation is being made that price patterns will recur in the future.