Are gold futures in a bull market?

Continuation pattern in gold futures suggests $1,340 could be in play

After posting one of the largest monthly gold futures rallies seen in several years, the precious metal has been confined to consolidation. During this time, the price of gold has been as high as $1,280 and as low as $1,200, which has surely been enough volatility to scare out weak handed bulls, and shake out the feeble bears. Unfortunately, pain on both sides of the trade is necessary for true price discovery. Nevertheless, once the dust settles there will likely be a breakout; conventional wisdom says that breakout will be to the upside. 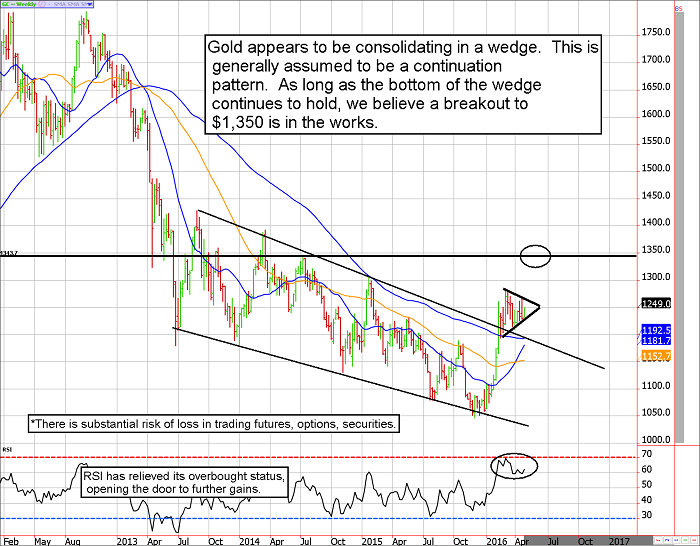 The weekly chart of gold futures depicts the consolidation wedge pattern nicely. It also suggests the price of gold has held support marked by the previous resistance trend line. This is typically a very bullish sign; false breakouts generally fail to hold such support and fall back into the previous trading range. In short, this rally probably hasn’t run its course yet.

Technical oscillators such as the RSI (Relative Strength Index) are no longer overbought. At a value of 60, there is no inference that gold is “cheap”, but there is an inclination that the door is open for another leg to the rally before the market can be deemed overvalued again. In my estimation, a breakout of the wedge to the upside (over $1,265), “should” provide the momentum needed to test the July 2014 highs near $1,340.

Obviously, the Federal Reserve monetary policy, or more importantly the currency market’s reaction to that policy, will play a large role in determining whether or not gold follows the chart pattern. Accordingly, we took a look at the weekly chart of the U.S. Dollar Index, and came to a similar conclusion. Not surprisingly, the dollar chart is revealing a similar digestive configuration which could be pointing toward continued weakness (the opposite of what a gold chart is proposing). The June dollar is currently hovering near 94.30; a continuation of the downswing should put prices closer to 93.00, which represents long term support for the dollar. 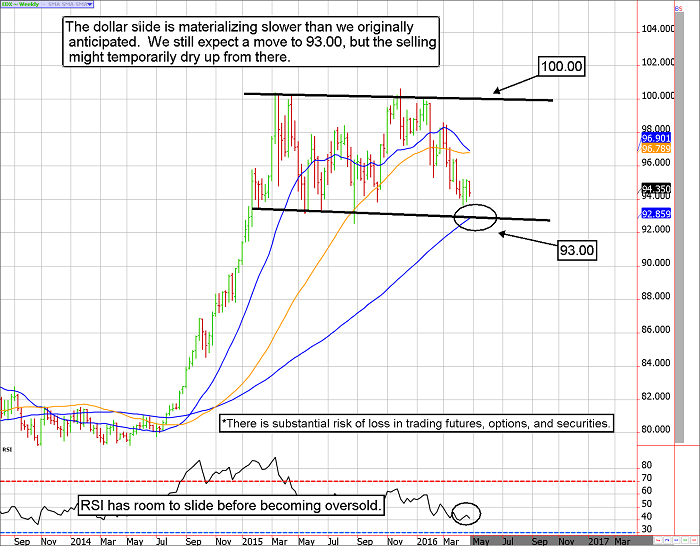 Assuming our analysis regarding a move to $1,340 in gold is accurate, we do believe the upside will be limited to that general price area for the time being. Weak seasonal pressures for gold and bullish seasonality in the dollar tends to materialize in May. Additionally, large speculators are starting to amass a rather large net long position in gold, soon we might be an environment in which most of the bulls are already in the market. Thus, there could be a pause in the gold rally and dollar slide once the technical targets of $1,340 and 93.00 are reached.

**There is substantial risk of loss in trading commodity futures, options, ETFs.  Seasonal tendencies are already priced into market values.