This newsletter was distributed to DeCarley Trading brokerage clients on January 20, 2017.

We are seeing mixed signals in Texas Tea

There is always some uncertainty involved in crude oil market analysis, yet in the current environment, I would argue there is only uncertainty. We like to look utilize a handful of market analysis tools which generally include seasonal tendencies, the Commodity Futures Trading Commission’s (CFTC) Commitments of Traders Report (COT), and technical analysis. Each of these schools of thoughts are resulting in conflicting conclusions. Historical seasonal patterns suggest the path of least resistance during this time of year is higher (bullish). On the other hand, the COT Report warns of a potentially massive wave of speculator liquidation (bearish). Adding to the confusion, the price of crude oil as deemed by prominent chart analysis techniques is precisely neutral.

We all know that seasonal patterns aren’t the Holy Grail of trading but we also must recognize that price patterns that occur more often than not shouldn’t be ignored. One of the most reliable seasonal patterns over the years has been the strength of crude oil beginning in the latter part of the first quarter and extending through most of the third quarter. Again, this doesn’t mean that making money will be as easy as going long crude oil futures in January and selling in October, but it does mean that it might be a good idea to consider getting bullish on any large dip early in the year and getting bearish on any large rally later in the year. Despite positive seasonals that typically kick in next month, oil prices are on the pricey side. Thus, unless the market drops sharply in the coming weeks to enable entry at a discount, it would be difficult to trust the normal pattern. 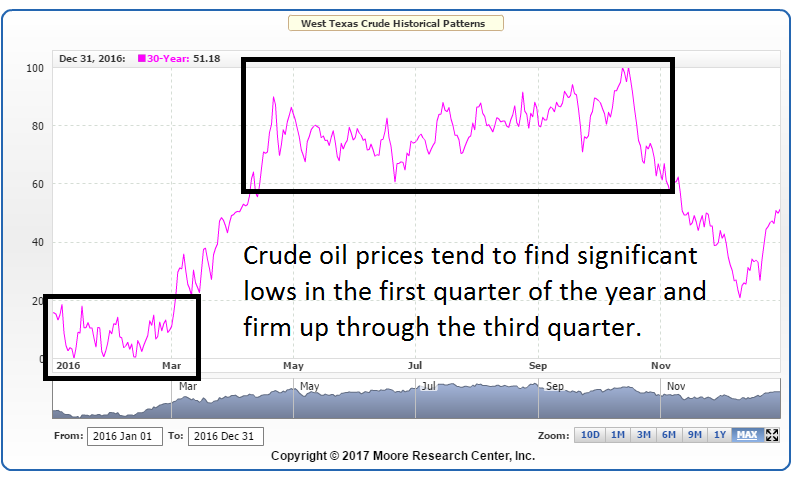 Our favorite tool for assessing market sentiment as well as identifying overheated trends is the CFTC’s COT Report. As a recap, when the COT Report suggests that speculators have amassed a relatively large net long, or net short, position it is generally a sign of a trend exhaustion. In simplicity, the idea is if “everyone” has already bought the market the buying will dry up due to a lack of available trading capital to enable the trend to continue. The same is true of a prolonged downtrend in which traders have expelled their capacity to sell additional futures contracts.

It might be hard to believe, but crude oil futures speculators are holding the largest net long position we’ve seen since oil crashed from just over $100 per barrel and eventually landing in the high $20s. In other words, the last time speculators were this aggressively long, the price of oil dropped roughly 60% in six months! This tells us that the upside could be limited for now. Further, it opens the door for mass liquidation should market participants be forced to digest some unexpected bearish news.

Unfortunately, the crude oil chart is equally as mixed. The Relative Strength Index (RSI) is mid-range without any hints at momentum and the price of crude oil futures are waffling within a trading range that dates back to the 2015 lows. In short, we cannot see any edge that would give directional traders anything more than a 50/50 proposition. 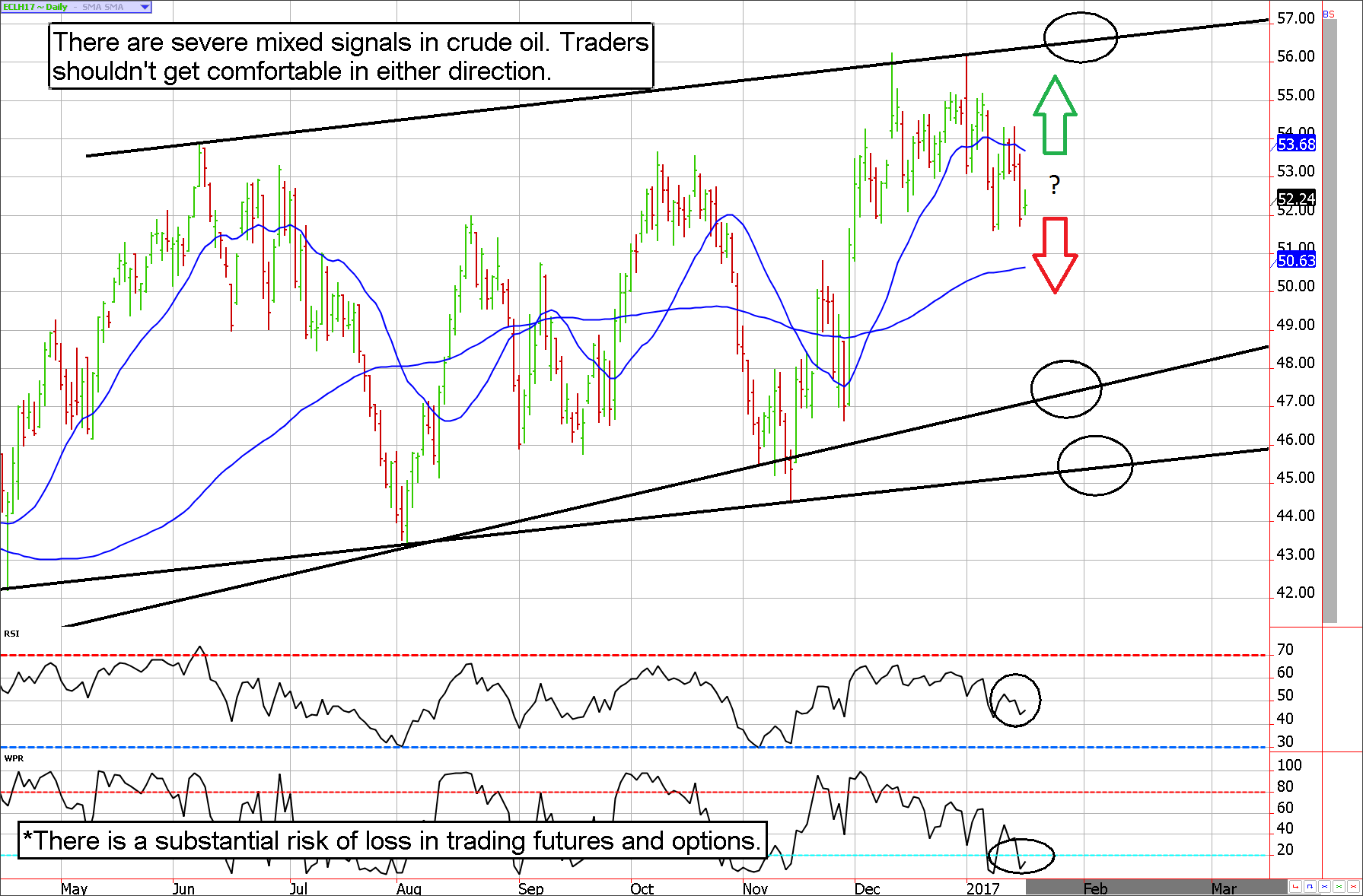 What to do about this Crude Oil Market Analysis

In light of the lack of clear direction in oil futures, the casual investor should probably take this as their queue to either stay away, lock in any profits that have been made on the way up (or down), and wait for the next move. Yet, aggressive speculators might be interested in buying option strangles. In short, this involves buying a call option and a put option in the same expiration month. Because more options than not expire worthless, it is generally a good idea to shop for low-priced options which also pose low risk to traders.

Specifically, we like the idea of going long the May crude oil 40 put and the 65 call. The total cost of the trade should run about $500 before considering transaction costs. This will represent the total risk of loss. While both $65 per barrel and $40 might seem like a long way away, we've seen moves of that magnitude several times in the last few years. Also, these options have just under 90 days to expiration. Even if the price of crude never reaches the strike prices it is possible that a volatile move in a particular direction will do the trick. For instance, the May $65 call traded as high as $750 a few weeks ago and the $40 put was upwards of $550 in mid-to-late-December. In theory, these options shouldn't erode very quickly due to their lengthy time to expiration. This trade gives traders 3 months in the market with limited/low risk and a non-directional bias.

DeCarley Trading (a division of Zaner)
Twitter:@carleygarner
This email address is being protected from spambots. You need JavaScript enabled to view it.
1-866-790-TRADE(8723)
www.DeCarleyTrading.com
www.HigherProbabilityCommodityTradingBook.com
**There is substantial risk of loss in trading futures and options.** These recommendations are a solicitation for entering into derivatives transactions. All known news and events have already been factored into the price of the underlying derivatives discussed. From time to time persons affiliated with Zaner, or its associated companies, may have positions in recommended and other derivatives. Past performance is not indicative of future results. The information and data in this report were obtained from sources considered reliable. Their accuracy or completeness is not guaranteed. Any decision to purchase or sell as a result of the opinions expressed in this report will be the full responsibility of the person authorizing such transaction. Seasonal tendencies are a composite of some of the more consistent commodity futures seasonals that have occurred over the past 15 or more years. There are usually underlying, fundamental circumstances that occur annually that tend to cause the futures markets to react in a similar directional manner during a certain calendar year. While seasonal trends may potentially impact supply and demand in certain commodities, seasonal aspects of supply and demand have been factored into futures & options market pricing. Even if a seasonal tendency occurs in the future, it may not result in a profitable transaction as fees and the timing of the entry and liquidation may impact on the results. No representation is being made that any account has in the past, or will in the future, achieve profits using these recommendations. No representation is being made that price patterns will recur in the future.