Speculators are as short Treasuries as they have been in years, are they right?

We all know the case for being a Treasury bear; the arguments for higher interest have been vigorously circulating rates for years. For instance, a plethora of articles have been written discussing the assumption that years of unprecedented money printing by the Fed will eventually catch up to us in the form of inflation. In turn, investors have been inaccurately expecting this to force bond prices dramatically lower.

Others claim interest rates can’t stay historically discounted because the cure for low prices is always low prices. In other words, low yields should discourage investors from putting money to work in Treasuries and the lack of demand should deflate bond prices while inflating interest rates. Yet, neither of these nor the dozens of other, premises touted by Treasury bears have yet to materialize. Further, each time traders have acted aggressively on such ideas they have been burned by the new reality of lower for longer interest rates. Let’s take a look at a few developments that suggest the path of least resistance for US-backed Treasuries is higher, not lower. Likewise, yields could move lower, not higher.

Treasury futures speculators are too short

We scoured data dating back to 1992 and wasn’t able to find an instance in which speculators were as heavily short the 10-year note Treasury futures market as they are right now. Both large and small speculators are holding record, or at least near record, bearish positions in T-note futures. There is always a chance this bet pays off, but we’ve noted countless occasions in the last decade in which traders become “too bearish” and the market makes them pay for their misguided complacency. Given the history of this trade, we have to proceed with the idea of a repeat.

In other words, we believe the market already reflects all of the bearish news and sentiment. The pendulum has probably swung too far and will be more likely to succumb to the gravity pulling on it to swing the other way. After all, each trader who sold futures contracts will eventually have to buy them back to get square with the market. This could put a tremendous amount of buying pressure on prices leading to a potentially massive rally. In summary, the largest net short position in history will eventually need to be unwound and we wouldn’t want to be caught on the wrong side of that trade! 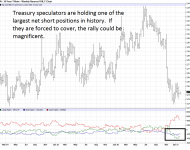 US Yields are relatively high

Savers in the US wake up every morning wondering where they should put their hard-earned money to return a respectable yield without taking elevated risks. Unfortunately, such opportunities simply don’t exist in the current environment. Those chasing yield are being forced to accept substantial amounts of risk, even if they aren’t necessarily aware they are doing so. On the flip side, those seeking complete safety are losing buying power due to dismal returns on their capital. Nevertheless, as dire as things are for the “savers” in our economy, investors in other countries have it even worse. In fact, US Treasuries are relatively high in yield and low in default risk when compared to global alternatives.

For instance, the US 10-year note offers a current yield of about 2.48% and a minuscule default rate. Investors seeking similar return using other government issued debt around the world would be forced to accept considerably higher default risk. To put this into perspective, German 10-year bonds are yielding a mere 0.45%, investors in the UK can expect to get 1.44% on their money using the same maturity, and it Japan the return is a nearly negative 0.08%.

While it is obviously to find securities yielding better returns, they come with risks that some investors aren’t willing to accept. Accordingly, foreign investors might seek the safety and yield of US Treasuries for the time being, which should keep domestic rates on the decline.

We don’t need to explain to most readers that there is an unprecedented amount of uncertainty. Love him or hate him, Donald Trump is the change candidate that is delivering on his promises. The question remains whether the changes will be too much for the country to bear, or if they will be as positive for business and growth as the markets have projected. At this point, political pundits can’t predict tomorrow, let alone next year. With the stock market near an all-time high, some investors might decide to take profits and move into safety assets to observe from the sidelines. If so, Treasuries will be a direct beneficiary.

According to stats evaluated by our friends at MRCI, the 10-year note Treasury futures contract has had a tendency to strengthen from February through May. Of course, the timing of the seasonal move varies from year to year but the key point is this move happens more often than it doesn’t. The fact that we are approaching the seasonally bullish time of year for the market when traders are aggressively playing in the opposite direction and prices are cheap relative to recent history, suggests that the path of least resistance should be higher for US Treasuries (and thus lower for yields). 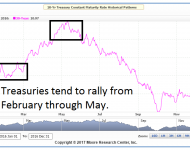 Although we are futures brokers, when looking at the big picture in the Treasury market we often look at the TLT ETF to form basic charting analysis. This is because futures contracts expire every quarter and, therefore, sometimes have inefficient long-term charts available. The TLT is a nice substitute.

We can’t help but think the market is trying to put in some sort of double bottom at a time in which the Williams %R oscillator is oversold and suggesting a reversal could be imminent. The RSI, on the other hand, isn’t currently expressing prices as oversold but it is suggesting momentum might be creeping higher overall.
If we are right about the upside bias, a break above the mid-January highs could lead to a substantial upswing. 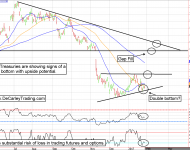 *There is a substantial risk of loss in trading commodity futures, options, ETFs. Seasonal tendencies are already priced into market values.