As you have heard time and time again, you must have a plan of action going into a trade. The point at which you chose to adjust should be determined in advance, however every successful trader understands that it may be appropriate to stray away from the original plan and unfortunately this is something that only comes with experience.  When trading Dow futures, a rule of thumb is to convert a naked option into a debit spread once the underlying future comes within 100 points of the strike price if there is 20 days or more left until expiration and momentum oscillators are suggesting that the momentum is against the short option position.  Another point of reference as to when to exit a losing short option is what we call the double out rule.  If the short option doubles in value from the point of entry, it is probably fair to say that the original speculation was incorrect and the risk should be taken off the table.

Remember, rules of thumb are created so that they can be broken.  In other words,  don't fixate yourself on such a general rule that you ignore everything else around you.   Just because the criteria has been met doesn't mean that you should immediately exit the position and evaluate the situation after.  Emotions, namely fear, can make staying calm in the heat of the moment very difficult.

Any trader will tell you that April of 2005 was an exceptionally unpredictable and volatile month in the financial markets.  One could have easily been fooled by the chart of the June Dow Jones future.  As you know, the Dow traded in a very distinct trading range throughout 2004, and it appeared as though it was setting up to post similar action in 2005.  After peaking in early March, the Dow appeared to have found support around the 10,400 area.  This is precisely the point in which the market found a bottom in January of 2005, providing an opportune time to execute a bullish option spread 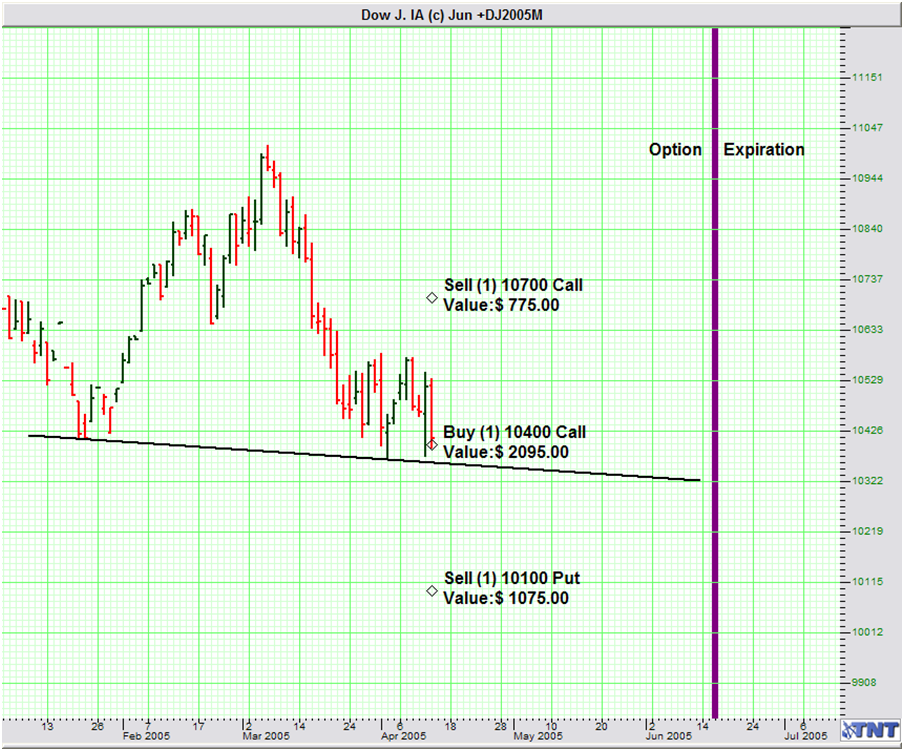 However, as we all know, things are not always as they seem.  Rather than holding support and heading to the top of what was believed to be the trading range, the Dow quickly dropped.  At this point a trader can do one of three things, liquidate the short put at a loss, wait and hope that the market rebounds, or adjust the trade.