On April 14th, one day after executing a trade that seemed to have a perfect set up, the June Dow Jones futures contract impulsively dropped though previous market support and settled near the low of the day.  At this point, the market has violated many of the previously mentioned “rules of thumb” in Dow futures trading. Thus, an adjustment seems necessary.  Based on Black and Scholes data, a trader could have purchased a 10300 put on the open of trading on the 15th for $2025.  The net result is a 10300 / 10100 bear put spread, along with a 104000 / 10700 bull call spread above the market.

Purchase of the 10300 put for $2450, if left intact, provides an opportunity to profit on the put spread if the market is below 10100 at expiration. After all, we originally collected $1075 for the 10100 put and the spread can make as much as $2000 intrinsically.  This would give us a profit of $625 intrinsically below 10100.  Conversely, we cannot forget about the money that is lost on the call spread.  Assuming the call spread is held until expiration and expires worthless, even the maximum payout on the put spread would leave the trader in the hole by about $695 before transaction costs.  While this doesn’t sound like an exciting proposition for most futures traders, it far outweighs the alternatives.

Table 2 Creating a Bear Put Spread from a Naked Put

Once a naked option is “repaired”, the trader now faces the decision to either hold the adjustment into expiration or attempt to trade out of it.  This can be even trickier than placing the adjustment itself.  If not handled properly, a trader can easily be “whipsawed” in and out of the market resulting in substantial losses. 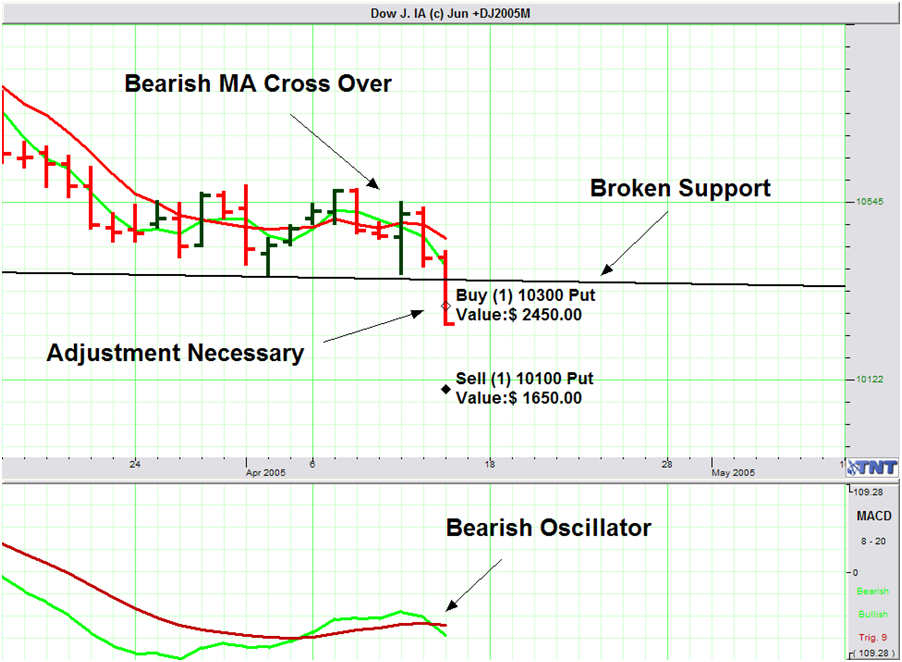 In the simplest scenario, the Dow would have declined below 10,100 and remained there until expiration.  However, the June Dow found support just about 10,000 and made an impressive rebound forcing a trader in this position to assess the market and determine if and when to begin “legging out” of all or part of the trade.  In a situation such as this, it is critical that a trader not panic and liquidate legs prematurely.  For this reason, similar to entry of the adjustment, exit should be triggered by a crossover of the 3 and 7 day moving average along with confirmation from the MACD or any other combination of oscillators that you have faith in.

On April 25th, the MACD triggered bullish signal, which confirmed a MA crossover indicating that the market could be headed higher in the near term.  This should also be seen as an opportunity to sell the previously purchased 10300 put.  After all, options are an eroding asset.  It doesn’t make sense to hold a long put if technical momentum appears to be pointing towards higher a higher Dow.  By selling the long put on the open of the trading session, the trader may have received $2225, a loss of $200 plus commissions and fees on this particular leg but worth it in terms of sanity and potential sleep loss.

In this particular trade, it appears as though a trader would have been better off without adjusting.  By keeping the original spread intact and withstanding the fluctuation, a trader could have avoided the $200 loss incurred and the extra commission paid for the adjustment put.  But keep in mind; the potential loss was much greater.