As previously mentioned, a three-legged spread such as this can also be adjusted in a scenario in which the market does in fact go in the intended direction.  Let’s take a look at an example in which the trader is correct in the speculative direction of the market and has the opportunity to “extract” a little more profit from the trade. 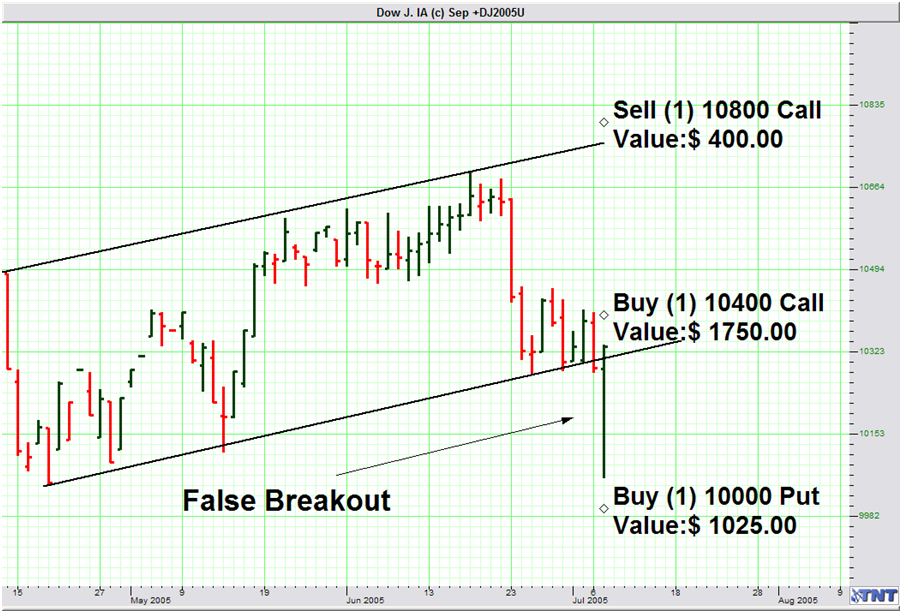 In mid July, the Dow made an impressive comeback following the panic liquidation triggered by the terror attach in London.  After analyzing the technical aspect of the market a savvy trader may have found this to be the perfect time to enter the market with a bull call spread with a naked leg.  A failed breakout of the trading range is one of the most reliable indicators for future price action.  According to the information available to us, on July 11th, a trader could have bought a September Dow 10,400 call, sold a 10,800 call and a 10,000 put for a total cost of $325 before commissions and exchange fees.

Unlike the last example, the market immediately goes in favor of the trade.  When trading three legged option spreads, it is important to remember the old adage “You can’t lose taking profits.”  By carefully exiting the trade one leg at a time, I believe that it is possible to maximize your odds of success while minimizing your risk.

The bulk of the risk of this trade lies in the naked put, thus this is the first leg that we will look to liquidate with a profit.  Once again we will look to technical analysis to guide our decision, however this time we will also monitor the time premium erosion of the naked put.  Option sellers should consider taking profits, and risk, off of the table once the value of the option has eroded to less than 40% of the premium collected.  From there decisions should be guided by the direction and stamina of the current trend measured by technical indicators such as the MACD.  If it gets to the point in which 80% or more premium has eroded, you should no longer be considering whether or not to buy it back you should simply do it.

On July 18th, the value of the September 10,000 put has declined to $400 meeting are criteria to begin consideration of buying the option back at a profit.   Next, a trader should look to their favorite oscillator to determine the direction in which they believe that the market will go in the short term.  If indicators are pointing towards a rally, a trader would be best off holding out in hopes of additional profit.  However, if it appears as though the market might weaken, it is time to take profits on the short put. On July 25th, the trend oscillators are beginning to look as though the market is prepared for a correction.  Additionally, the Dow is finding significant resistance as it approaches the June highs.  At this time, a prudent trader would look to buy back the put for $350 according to theoretical values to take a profit of $675 on that particular leg.  This is a good idea even though the oscillator hasn’t actually given the signal. 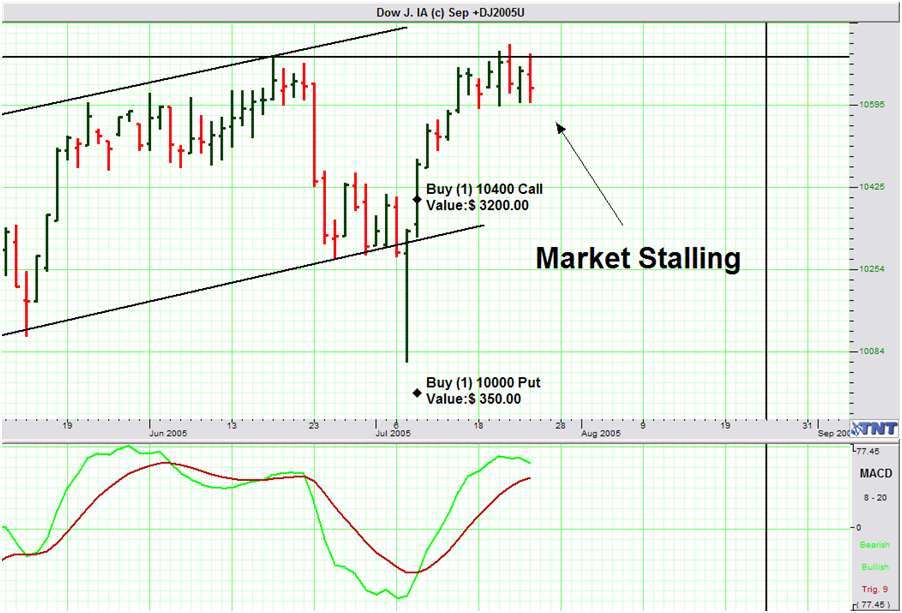 The offset of the put eliminates a significant amount of the risk in that there is no longer unlimited danger, and leaves the trader with a limited risk bull call spread.  The next step in the adjustment process is to sell the long 10,400 call.  Similar to legging out of the put, selling the call should be based on technical analysis.  Naturally it would be ideal to liquidate the call option at the top of the market, but I think we all realize that this is easier said than done.  Once again, we should rely on the MACD to guide liquidation of the long call.   At the time of the MACD crossover, a trader could have collected  $3225 for the 10,400 call option to net a profit of $1475 before commissions and fees. 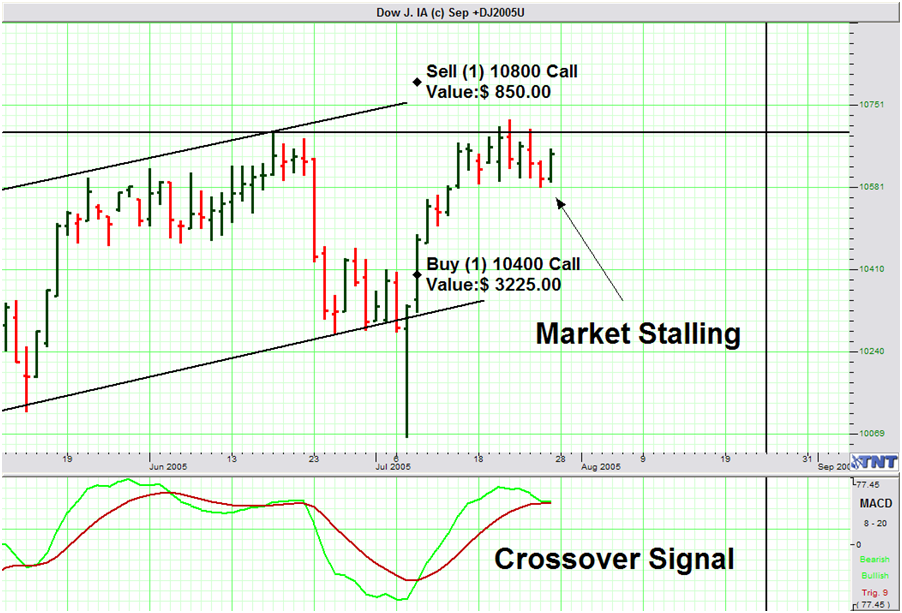