Once a market is deemed to be suitable for S.O.S. trading, traders should evaluate the technical condition of the market in order to determine proper strike prices.  This includes trading ranges, support / resistance, Fibonacci rulers and any other technical analysis tool that you are comfortable with.

As you can imagine, traders who sell call options above significant technical resistance levels increase their odds of a successful trade.  Similarly, short put options should be placed below market support.  After all, even if a market penetrates support or resistance, it will likely stall before doing so.  To a short options trader, time is money.  As mentioned before, every passing minute diminishes the time value of an option.

It is imperative that traders are always aware of their intrinsic reverse break-even point.  At expiration, the reverse break even of an S.O.S. is equal to the strike price plus or minus the premium collected:

RBE on the Put Side = Strike – Total S.O.S. Premium Collected + Commissions and FeesR

BE on the Call Side = Strike + Total S.O.S. Premium Collected - Commissions and Fees

The perfect scenario for selling strangles is a market that is trading in a definitive trading range.  This provides traders with the ability to “predict” the market’s range at expiration by extending the trend lines. I use the term predict loosely, as we all know there is no way to know the direction of the market with any certainty.  The best we can do is make an educated guess.  Let’s take a look at an example.

2004 was ideal for option selling in equity index futures, the S&P 500 spent a majority of  the year in a trading range.  On May 18th, the market approached the lower lip of its recent boundary and appeared to hold.  Given that the last 30 days of an option’s life see the most depreciation, the June options expiring on Friday June 18th were very attractive.  This is also a great opportunity to sell overvalued puts. 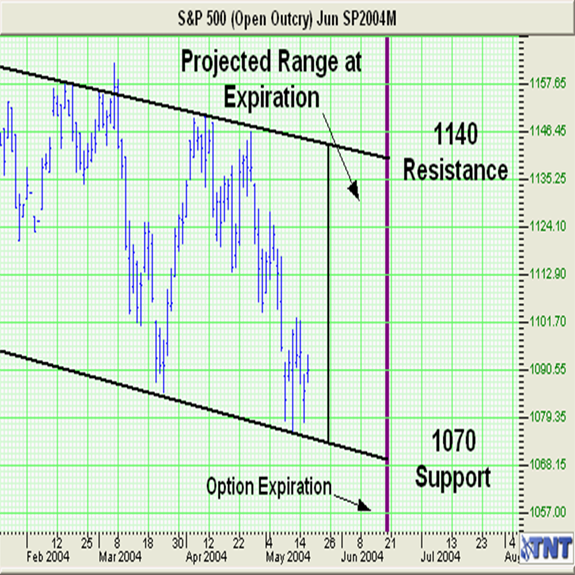 The premise of S.O.S. is to increase the odds of success, thus selling a put with a strike price immediately underneath the projected bottom of the range is defeating the purpose of the strategy.  Thus, a trader should look to “give the market breathing room” by selling below support. On this particular day, according to hypothetical data available you could have sold the 1030 put for $6.00 in premium or $1500.  The 1175 Call would have collected $2.50 or $625 (values are based on the Black and Scholes Model). 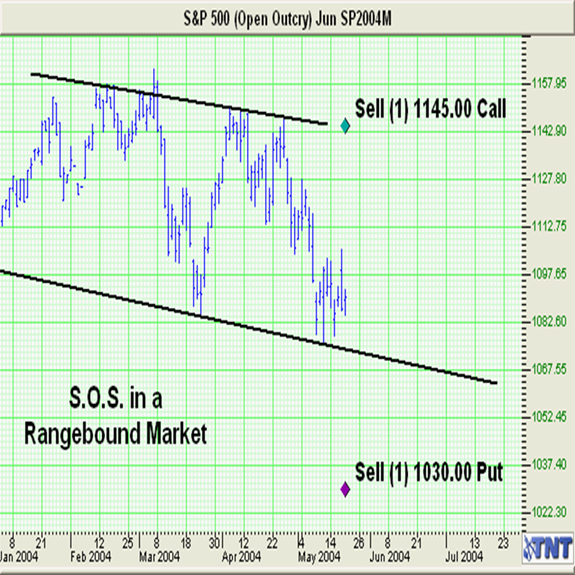 Notice, that the spread is purposely constructed in a way that the risk and premium is over weighted on the put side.  This is because the market is up against heavy support and will likely reverse, or at least stall at this level.  Also, note that the Call strike is strategically placed above resistance.

In this case, the June S&P futures contract does find support and climbs its way up to the upper end of the trading envelope.  Although, 1140 is tested the resistance is only briefly broken.  The market then drops back into the range to settle at 1132.25 on June 18, the day of option expiration.  While this example makes option selling look easy, I assure you that it is not always this convenient.

Trading ranges take some of the guesswork out of option selling, but unfortunately things don’t always work out so nicely.  Just as those trading outright futures contracts would, option sellers should consider technical analysis tools to determine strategy.  The most important consideration for option sellers is the placement of strike prices and the time frame of the option expiration.  Each trader will have a different idea as to which indicators and tools work, but the truth is you must pick those that you have confidence in.  In reality, I am of the opinion that they all have similar success ratios.

Positioning strike prices in a market that does not have a clear technical trading range can be much more challenging. Because support and resistance may not be as acutely defined, it is up to the trader to use a combination of technical tools and oscillators to find areas of support / resistance.   The tools and oscillators used will depend on the market environment, time horizon and risk tolerance.  Let’s take a look at an example of a trade that and the methodology that may be involved in the placements of strike prices.

On August 8th of 2005, the S&P was in the midst of a bull run that began in late April.  The market was technically overbought, but in a definite up trend.  A quick look at the chart reveals that trend line support could potentially be found at about 1210 and then again at 1195 based on two alternative versions of an uptrend line.  The importance of drawing two possible trend lines is to keep your mind open to what your competition (other traders) might be looking at.  Even if the market breaks the first version, it may be prone to interfere with the market’s momentum.  Once again, this could translate into profits for a short option trader in the form of time erosion.

Strike prices should always be placed beyond what is believed to be the most distant area of support or resistance.  Similarly, if there is a recent high/low beyond what you have deemed to be the final area of support/resistance, it should be considered in the placement of your strike price.  In this case, 1195 appears to be the distant trend line support however the market reached a low of 1185 on July 7th.  Thus, in our opinion selling an 1185 put is a preferable choice in that it gives the market sufficient room for normal fluctuation. 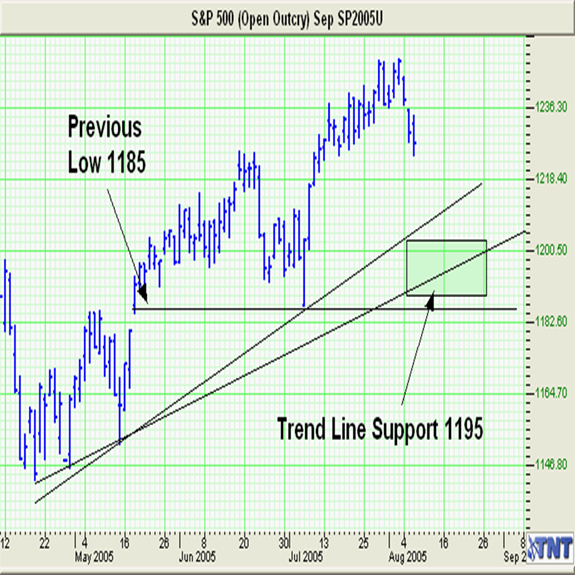 Finding recent resistance in order to place our short call option required a little more research.  Because the market was trading near multi-year highs, we chose to use a monthly chart for our analysis.